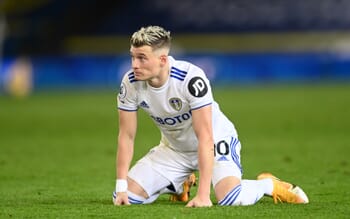 This is one of those Premier League matches where it’s a great shame not to have spectators in attendance considering that there would be a packed Elland Road witnessing a clash between two teams who have a historic football rivalry.

While Leeds are the betting outsiders, our tip is for Marcelo Bielsa’s side to take at least a point against Manchester United, with the Yorkshire side having recently claimed a 2-1 victory away to Manchester City with ten men and they’ll relish the chance to go up against the Red Devils.

Leeds currently sit in the top half of the Premier League table and they’ll be out for revenge against a team who tore the Whites apart before Christmas when winning 6-2, although our prediction is that Bielsa’s team will be a good deal tougher to break down here.

After winning at the Etihad Stadium thanks to two Stuart Dallas goals, the home side have enjoyed a nine-day break before a clash against Liverpool, with Kalvin Phillips giving the Yorkshire side a more solid midfield base and Patrick Bamford being one of the surprise packages of the campaign.

The Red Devils are unbeaten away in the Premier League this season with ten wins and six draws on the road, with Mason Greenwood coming to the table in recent weeks and the team have won five consecutive matches since coming back from the international break.

However, there are clashes with Roma and Liverpool on the horizon and the team did recently leave it late to claim three points against Burnley, with United likely to be pressed hard by hard-working opponents and our prediction is that this clash could end in a draw.