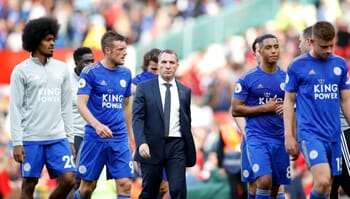 Leicester City are not tumbling down the Premier League table – in fact they are still stationed in third place behind Liverpool and Manchester City – although the gap between them and the chasing pack has significantly shortened in recent weeks.

Since winning 3-0 at St James’ Park on 1 January, the Foxes’ form has gone off a cliff and there has been just one Premier League victory since then, while Brendan Rodgers’ side have also been beaten over two legs against Aston Villa in the EFL Cup semi-finals.

Perhaps rumours of their demise are inaccurate considering that Leicester served up a bright performance when losing 1-0 to Manchester City a fortnight ago, while a 2-2 draw against Chelsea in their previous game at the King Power Stadium saw the Midlands side dominate the match.

Jamie Vardy missed the recent 1-0 defeat at Norwich but should be raring to go against a Villa team who will have been exhausted after ninety minutes at Wembley Stadium where they battled gamely against Manchester City before losing 2-1.

Dean Smith’s side are simply not very good away from home and they have lost ten of their fourteen matches on the road this season. There have often been occasions where the Villans have looked outclassed and if it wasn’t for the striking form of Jack Grealish, the team could be sitting bottom of the table.

There appears to be an injury concern regarding Grealish considering he was clutching his calf muscles during the EFL Cup final, although Villa will always be attack-minded under Smith and we think they can find the net during the ninety minutes of this clash.

However, Leicester do have eight victories on the board at the King Power Stadium and this winless run can’t continue indefinitely, with the best bet potentially being the Foxes to triumph and both sides finding the net.

When is Leicester vs Aston Villa being played?

Leicester vs Aston Villa will be played at 20:00 GMT on Monday 9 March 2020 at King Power Stadium.

What is the Leicester vs Aston Villa H2H record?