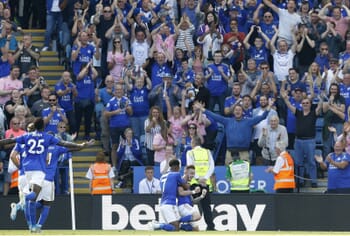 There’s an incredible eighteen places and twenty-four points separating Leicester City and Watford in the Premier League table, with the Foxes having a brilliant season under Brendan Rodgers to the extent that the Northern Irishman is being linked with the Arsenal job.

Rodgers would clearly be a fool to take this position considering there’s an outside chance that he can land the title with the Midlands club this season and they’ll be confident of staying on Liverpool’s coat-tails by landing victory over a manager-less Watford side.

The Leicester manager has seen his team win seven consecutive games in all competitions and will try to ward against complacency although his side are delivering the goods every week and could win by a comfortable margin.

Jamie Vardy is the division’s top scorer with thirteen goals which is nearly an average of one per game, while Rodgers has a settled team which includes Wilfried Ndidi and Youri Tielemans orchestrating affairs in a midfield position.

As for Watford, what chance do they have at the King Power? Victory was in their grasp at St Mary’s on Saturday only to let Southampton back in the game, while Quique Sanchez Flores has now followed Javi Gracia out of the exit door.

The Hornets are six points behind seventeenth-placed Everton with a vastly inferior goal difference and are clearly in danger of losing touch with the teams above them. Indeed, Chris Hughton’s imminent appointment suggests that the club want someone with a good Championship track record.

Watford have avoided defeat in three of their seven away games, although confidence levels are low and we’re going to back Leicester to enjoy a sizeable win in this clash.

The Hornets defence has been leaking goals in the past couple of games, with Burnley and the Saints collectively managing five goals and we think Leicester can overcome a two-goal handicap with relative ease.

When is Leicester vs Watford being played?

Leicester vs Watford will be played at 19:30 GMT on Wednesday 4 December 2019 at King Power Stadium.

What is the Leicester vs Watford H2H record?