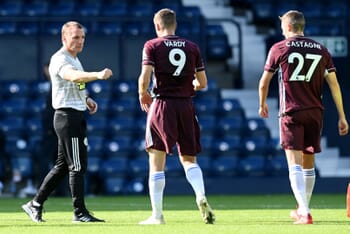 Leicester began the season with a comfortable 3-0 victory at The Hawthorns, with West Brom barely laying a glove on the Foxes despite the fact that the visitors were missing a number of key defensive players.

Brendan Rodgers’ side now have the chance to build on that win and they’re strong betting favourites to topple Burnley at the King Power Stadium, with Jamie Vardy eyeing more goals after bagging a brace of penalties against the Baggies.

Harvey Barnes and Ayoze Perez were bright in that match and James Maddison is pressing for a start, although we can’t help but feel that West Brom are out of their depth at Premier League level and our prediction is that Burnley will make life a good deal tougher this weekend.

It’s hard to judge the Clarets given that this will be their first match of their 2020/21 Premier League campaign, having had a rest week and Sean Dyche’s side will have therefore benefitted from extra preparation as they look to continue where they left off last term.

Burnley a Good Bet After a Fantastic Finish to Season

Burnley were very lively after the enforced lockdown and ending up clambering into the top half of the Premier League table, finishing just eight points behind Leicester. The Lancashire side went on a seven-match unbeaten run which included a 1-1 draw at Anfield and we shouldn’t read too much into the final day home defeat against Brighton.

There hasn’t been much transfer activity at Turf Moor although the front pair of Ashley Barnes and Chris Wood are both very capable and we should expect Dwight McNeil to have a stellar season for the Clarets this time around.

Our betting tip is to back Burnley with a +1 goal start on the Asian Handicap betting market. James Tarkowski and Ben Mee will run a tight defensive ship in front of goalkeeper Nick Pope and this game could be a lot closer than the odds suggest.

When is Leicester vs Burnley being played?

Leicester vs Burnley will be played at 19:00 GMT on Sunday 20 September 2020 at King Power Stadium.

What is the Leicester vs Burnley H2H record?