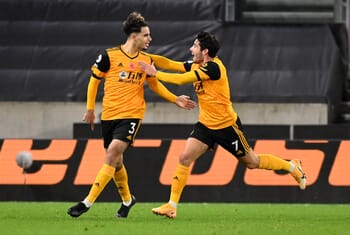 Leicester City are sitting second in the Premier League table coming into this latest round of top-flight fixtures, with the Foxes having won five and losing two of their opening seven matches although four of those victories have come on the road.

Brendan Rodgers’ side have been flawless away from the King Power Stadium this season although it’s been tougher going since beating Burnley at home this term, with Aston Villa coming away with a 1-0 victory after West Ham did a number on the Midlands side by winning 3-0.

Leicester Too Short in the Betting Against Wolves

Leicester are unsurprisingly betting favourites for this game although our prediction is that City will struggle to break down a stubborn Wanderers team, with the home side having Jamie Vardy back in the fold and he is flanked by the lively Harvey Barnes, while Youri Tielemans was able to score twice at Elland Road.

The 4-1 victory at Leeds was pretty emphatic although it had echoes of the 5-2 win at Manchester City where Leicester were able to pick off their opponents on the break and we’re not sure that Wolves will offer that much space in behind.

We are going to tip Under 2.5 Goals in this game and we’ve been really taken by a Wanderers side who went up to sixth place last weekend after a 2-0 win over Crystal Palace and Nuno Espirito Santo’s side have only conceded one goal since that 4-0 mauling at the London Stadium.

Rayan Ait Nouri made a sparkling debut at Molineux last weekend and it will have been especially encouraging for the manager that two goals were scored without Raul Jimenez being on the scoresheet, with the betting prediction being two goals or less.