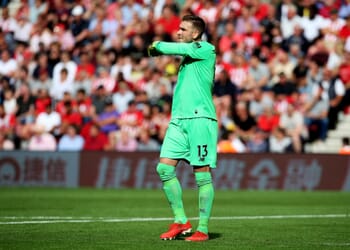 Last season, Liverpool drastically improved from a defensive point-of-view, with the acquisition of Alisson Becker between the sticks along with the commanding presence of Virgil van Dijk ensuring that the Reds were able to rack up 97 points in the Premier League.

However, Jurgen Klopp’s side have begun the 2019/20 campaign in a shaky fashion despite recording back-to-back top-flight wins along with a Super Cup penalty shoot-out triumph against Chelsea in Istanbul.

It hasn’t helped that Alisson is currently on the sidelines and that means third-choice keeper Adrian is being deployed in goal, with the former West Ham stopper culpable at St Mary’s last weekend when smashing the ball against Danny Ings and allowing Southampton to mount a grandstand finish.

Quite simply, Liverpool can’t be trusted at the back right now and Arsenal are certainly in a position to exploit them, with the Gunners having started the season with wins over Newcastle and Burnley.

It hasn’t been too convincing but Alexandre Lacazette and Pierre-Emerick Aubameyang have both demonstrated that they remember where the goal is, while Dani Ceballos could be a smart capture and the on-loan Real Madrid midfielder assisted both Arsenal goals against the Clarets.

Like Liverpool, this Gunners defence is not too reliable and we should note that the fixture ended 5-1 in favour of the home side last season, with Mohamed Salah, Sadio Mane and Roberto Firmino running riot.

The same situation might occur again, although Emery will surely learn from that horror show on Merseyside and draw inspiration from the way in which Norwich created so many chances a fortnight ago, while Southampton and Chelsea have also found holes in the defence.

The most straightforward bet appears to be both teams to score during the ninety minutes irrespective of the final outcome. For now, Liverpool are in “score more than the opposition” mode, especially with their star Brazilian keeper on the sidelines.

When is Liverpool vs Arsenal being played?

What is the Liverpool vs Arsenal H2H record?