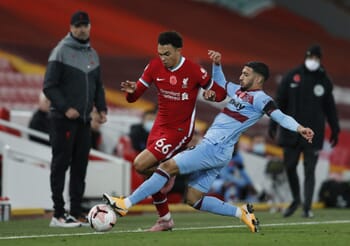 Fulham’s recent improvement has been admirable and it’s just possible that Scott Parker might steer the Cottagers out of the bottom three of the Premier League. However, we really can’t pass up the opportunity to bet on Liverpool to win this clash by two goals or more at Anfield.

At the beginning of the season, any punter would have snapped your hand off to get these sort of betting odds and our prediction is that Jurgen Klopp’s side will enjoy a handsome margin of victory against their relegation-threatened opponents.

Sheffield United might be the Premier League whipping boys this season although Liverpool’s 2-0 win at Bramall Lane might represent a turning point, with Ozan Kabak and Nat Phillips looking the part and the victory was achieved without Alisson between the sticks.

The scoreline should have been more emphatic against the Blades and the tip is to back Liverpool on the Asian Handicap betting market where they simply need to ensure a victory of at least two goals and we’re expecting more to be scored.

Fulham Looking to Put Up a Strong Defence at Anfield

Fulham have been transformed defensively and kept a swathe of clean sheets in recent games although it’s asking a lot for the London side to shut out such strong opponents at Anfield and they don’t offer a great deal going forward.

Parker will concede that his team won’t have a lot of the ball and potentially hope to profit on the counter through fast players like Bobby Decorva-Reid and Ademola Lookman, although this is effectively a bonus game for a team who can suck up a defeat and move on to the next clash.