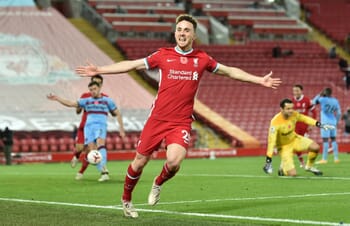 Liverpool have negotiated the 2020/21 Premier League season pretty well thus far, with the Reds accruing sixteen points from their first seven games played and that’s pretty decent considering that Virgil van Dijk has been recently missing and they’ve also had to contend without Alisson for some of the matches.

Let’s not also forget that the Reds have been winning regularly in the Champions League and their 5-0 victory away to Atalanta was sensational as Jurgen Klopp’s side picked off offensively-minded opposition and they will now look to continue their title defence after the international break.

Van Dijk and Fabinho are the notable players who are missing, with the attack looking even better now that Diogo Jota offers a viable alternative to Roberto Firmino and our prediction is that Liverpool will find the net against a Leicester City team who are not renowned for keeping clean sheets.

Brendan Rodgers is back at Anfield where he spent several happy seasons and the Foxes manager nearly landed the title on Merseyside in 2014, although he will now look to mastermind the downfall of his former employers.

Can Leicester Continue 100% Away Record in the EPL?

The good news for Leicester is that they tend to reserve their best performances for away matches and they will look to soak up pressure against dangerous opponents before trying to exploit their opponents on the break.

Jamie Vardy was the top scorer in the EPL last season and he could cause problems for a Van Dijk-less opponent, with Harvey Barnes and James Maddison also capable of supporting a quick attack.

Our best betting tip is to avoid Liverpool at short prices considering that they’ve only just beaten West Ham and Sheffield United at home, with the both teams to score betting market probably offering the best value.

When is Liverpool vs Leicester being played?

What is the Liverpool vs Leicester H2H record?