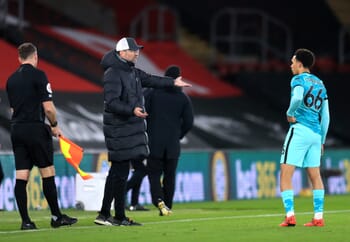 It’s been a bumpy few weeks for Liverpool since beating Crystal Palace by an emphatic 7-0 scoreline. While that victory made the Reds huge betting favourites to win the 2020/21 title, a failure to win any of the ensuring three fixtures means that Jurgen Klopp’s side are now 11/4 to be champions again.

Can Liverpool Bounce Back Against Arch-Rivals United?

Liverpool followed that victory at Selhurst Park with a 1-1 draw against West Brom before a goalless draw at Newcastle. Then came a 1-0 reverse at Southampton and Klopp will put out a weakened team in the FA Cup against Aston Villa to make sure his big guns are firing ahead of this clash.

The chances are that Liverpool will produce the goods when it really matters and our tip is for the Merseyside team to repeat their victory of last season when a 2-0 January victory really set the Reds on their way to the title.

It’s worth remembering that the home side have been capable of superlative performances this term and a 3-0 demolition of Leicester City was a case in point, with Roberto Firmino turning it on and it could be that Diogo Jota is back for this clash.

Will Manchester United Triumph at Anfield and Challenge for Title?

Ole Gunnar Solskjaer will hope that his team can continue their amazing home form this season by securing three points at Anfield and he will have noticed Liverpool’s recent failings.

Manchester United were well off the pace in the opening matches of the 2020/21 campaign although they quickly accumulated points, especially on the road where Bruno Fernandes was able to wreak havoc for the Red Devils on numerous occasions.

Fernandes could be a key player in this clash although our prediction is that Liverpool will produce one of those sparkling performances when it really matters and we’re taking them to triumph in this north-west clash between the two most successful clubs in the history of English football.

When is Liverpool vs Manchester United being played?

Liverpool vs Manchester United will be played at 16:30 GMT on Sunday 17 January 2021 at Anfield.

What is the Liverpool vs Manchester United H2H record?