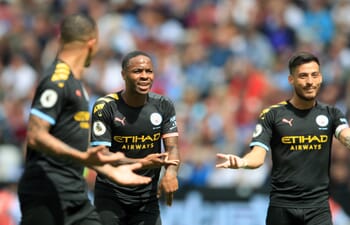 Manchester City didn’t need long to click into gear for the 2019/20 football season. The goals flowed freely at the London Stadium as Pep Guardiola’s side ran out 5-0 winners against West Ham and they’ll now look to overcome a team regarded as one of their main Premier League title rivals.

These two teams played each other four times last season. While the Citizens came away with 1-0 victories on a domestic front, it was Tottenham who enjoyed a Champions League quarterfinal victory after triumphing on away goals with the scoreline 4-4 on aggregate.

Spurs began their season by coming from behind to beat Aston Villa 3-1, with Mauricio Pochettino’s side clicking into gear late in the game and we’ll surely see Christian Eriksen start at the Etihad Stadium.

It was probably Tanguy Ndombele’s performance which was the most striking for Tottenham, although Lucas Moura was his usual busy self and there was also the deadly Harry Kane proving to be the ultimate match winner.

Naturally, this clash represents a stern test for Spurs and it’s worth noting that the London side lost eight times on the road last term, while they surely won’t execute a game plan that sees them sitting back against a team capable of running riot.

Guardiola preferred Riyad Mahrez over Bernardo Silva against the Hammers and we might see the Algerian on the right side again after a hat-trick of assists, while Raheem Sterling produced a hat-trick of goals and is likely to play alongside first-choice striker Sergio Aguero.

However, the City defence now has to cope without the injured Vincent Kompany and the central defensive pairing of John Stones and Aymeric Laporte is still finding its feet, with the visitors capable of getting on the scoresheet at least once.

Nevertheless, it’s clear that City have the capacity to fill their boots and we’ll back them to win the game with both teams finding the net.

When is Manchester City vs Tottenham being played?

Manchester City vs Tottenham will be played at 17:30 GMT on Saturday 17 August 2019 at Etihad Stadium.

What is the Manchester City vs Tottenham H2H record?