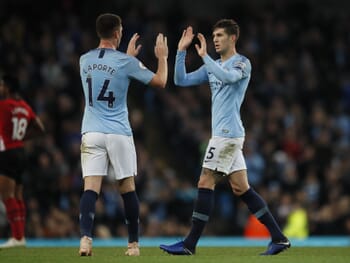 Manchester City are having a wonderful season despite the fact that they are heavily likely to miss out on landing the Premier League title despite Liverpool’s stunning form.

The Citizens are averaging over two points per match in the top flight and they are likely to make short work of a West Ham team who sit above the relegation zone at the time of writing.

Pep Guardiola will be casting an eye towards the upcoming Champions League clash against Real Madrid, although he still has a squad of players who are not only capable of beating West Ham but also shutting out their London opponents.

One reason to back Manchester City to win without conceding is the fact that Aymeric Laporte has recently returned from injury and the English champions have been crying out for the Frenchman over the past few months.

Laporte will be getting back up to speed and it appears as though he’ll be partnered with Nicolas Otamendi in central defence, with Raheem Sterling and Sergio Aguero looking to boost their personal goal tallies for the season.

West Ham have actually avoided defeat in 50% of their away matches this season although they were recently trounced 4-1 away to Leicester City and a strong XI was turned over at home to West Brom in the FA Cup.

David Moyes will probably look upon this game as one where damage limitation is important before the team go into a mini-break and it will be imperative for the Scot to see his players getting the defensive basics right.

While Manchester City do regularly ship the odd goal as part of a high-scoring win, there’s a big difference between the price about the home team on the Full-Time Result market and the odds about a win to nil.

When is Manchester City vs West Ham being played?

Manchester City vs West Ham will be played at 16:30 GMT on Sunday 9 February 2020 at Etihad Stadium.

What is the Manchester City vs West Ham H2H record?