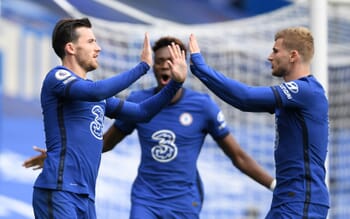 It’s looking likely that Chelsea will be the main challengers to Manchester City when it comes to the 2021/22 Premier League title, with Thomas Tuchel arriving at Stamford Bridge too late to have his team challenging during the current campaign.

However, the London side are in the box seat to land fourth spot in the Premier League and it’s our prediction that they will run Manchester City close at the Etihad Stadium considering that they recently beat the same team in an FA Cup semi-final.

Manchester City Odds-On in the Betting to Win

Manchester City can be officially crowned champions after this clash although perhaps a recent Champions League double header will have affected Pep Guardiola’s team and they look short enough in the match betting despite the fact that Sergio Aguero is back on the scoring trail.

It might be fitting if Aguero once again proved to be the title clincher, although Guardiola will have to be wary of his defence playing the high line which can be exploited by a team such as Chelsea, while the visitors are sure to put plenty of men behind the ball.

Chelsea look like big betting odds to win this game and perhaps their need is slightly greater considering that they are hard focused on securing a top four spot in the Premier League, with Tuchel’s side threatening to pull away from the chasing teams.

A draw would be regarded as satisfactory in a clash such as this and our betting tip is for Chelsea on the Asian Handicap betting market which means they get a one goal start and it’s money back should they lose by a single goal.