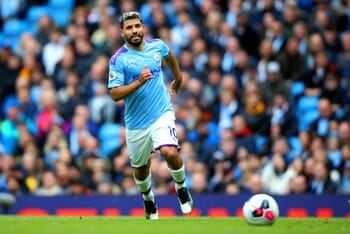 Manchester City finally get round to playing their first Premier League match at the Etihad Stadium on 27 September, with Pep Guardiola’s side having a tough opening to the season after previously heading to Molineux a few days earlier.

City are trading as favourites to regain their top-flight title after finishing runner-up behind Liverpool last season, with the former managing to score 102 goals across their 38 matches although seven away defeats put paid to their hopes of landing a consecutive hat-trick of titles.

Our prediction is that Manchester City will continue to score goals at a rate of knots, with Sergio Aguero back in the squad after being injured towards the end of the previous campaign, while there’s usually everything to like about Raheem Sterling and Kevin De Bruyne who should trouble a Foxes side still missing key personnel in defence.

Brendan Rodgers’ side won their first away match of the season at The Hawthorns although this is a far tougher assignment for a Leicester side who took the lead in this fixture last season but were then overrun by a rampant City team.

We’re going to tip a repeat of the previous fixture and go for a Manchester City victory along with both teams to score. The bottom line is that Citizens conceded 35 goals last season and the purchase of Nathan Ake doesn’t suddenly mean that the home side are going to become watertight.

Jamie Vardy continues to have the ability to stretch opposition defences and there’s also Harvey Barnes, James Maddison and Ayoze Perez who can score at least one goal between them, although we worry about the visitors from a defensive point-of-view.

Backing City in this way is a better betting alternative than simply opting for the home win, with odds of 2.50 (6/4) making plenty of appeal.

When is Manchester City vs Leicester being played?

Manchester City vs Leicester will be played at 16:30 GMT on Sunday 27 September 2020 at Etihad Stadium.

What is the Manchester City vs Leicester H2H record?