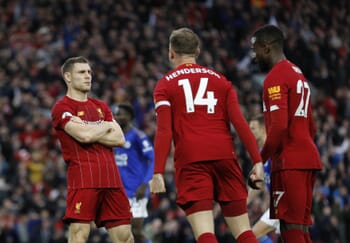 After some wild celebrations on Merseyside last week, Liverpool FC take to a football pitch for the first time since they were crowned champions, with the Reds facing the team who used to wear the crown and pipped Jurgen Klopp’s side to the title last season.

This match at the Etihad Stadium promises to be something special despite the fact that it’s effectively a dead rubber now that Liverpool have their first league title in thirty years, although Pep Guardiola’s side are favourites to land a blow against a team who have lost just once in the top flight this term.

Manchester City stumbled too many times this season when it mattered most, with Guardiola now rotating his squad and the main focus is to add more silverware to the EFL Cup that was won earlier in the year when beating Aston Villa at Wembley.

While the City boss will demand a professional performance in this clash of the titans, winning the FA Cup and making sure of second place will do very well from a domestic point-of-view, while the Champions League will soon come into view again.

We can’t get away from the fact that Liverpool were at their devastating best when demolishing Palace and Klopp might field the same Starting 11 for this encounter, with the aim to put on a show and demonstrate why they are the best in the land right now.

The bet we really like is Liverpool on the Asian Handicap betting market with half a goal start at reasonable odds of 1.72. Considering that City don’t strictly have home advantage and there’s a possibility of an experimental home side being fielded, we’re happy to get with the visitors.

When is Manchester City vs Liverpool being played?

Manchester City vs Liverpool will be played at 20:15 GMT on Thursday 2 July 2020 at Etihad Stadium.

What is the Manchester City vs Liverpool H2H record?