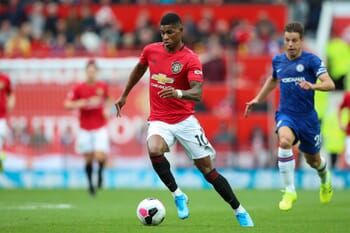 It’s been noticeable how defensively-minded Manchester United have been against the big teams this season in the Premier League and for that reason, we are going to tip a low-scoring derby on Sunday when the Red Devils travel to the Etihad Stadium.

There is a gap of twelve points between City and United at the top of the table, with Ole Gunnar Solskjaer claiming that his team won’t give up in their pursuit of their local rivals although the visitors surely won’t adopt a gung ho approach in this game.

Pep Guardiola’s side are enjoying an amazing winning run and they’ve been achieving a string of victories while rotating different personnel, with Sergio Aguero and Kevin de Bruyne recently coming back into the fold.

Ruben Dias has arguably been the team’s stand-out performer this term alongside John Stones for the majority of the campaign, while Joao Cancelo, Ederson, Phil Foden and Ilkay Gundogan have also been consistent performers.

The bookies have City as strong favourites to win and they might well prove too strong, although our prediction is that their opponents will try to nullify them from the early stages onwards.

Will Manchester United Park the Bus Against City?

Make no mistake, the target for the Red Devils is now to ensure they land a top four spot rather than challenge for the title and they have an uneasy six-point gap over fifth-placed Chelsea, while sixth-placed Liverpool are also coming back with a vengeance.

Ultimately, a point from this clash would be a big bonus and we’re going to look at betting on a low number of goals being scored in total. The Under 2.5 Goals betting odds is trading at a generous price based on United’s recent goalless draw at Chelsea.

Manchester City vs Manchester United will be played at 16:30 GMT on Sunday 7 March 2021 at Etihad Stadium.