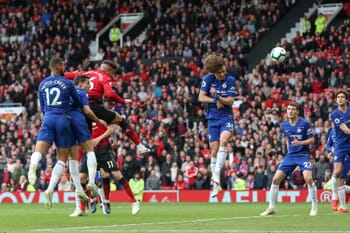 The Premier League game of the opening weekend takes place at Old Trafford on Sunday, with Manchester United lining up against Chelsea and one of these teams has been splashing the cash over the summer.

Ole Gunnar Solskjaer has been given the funds to sign Daniel James, Aaron Wan-Bissaka and Harry Maguire, with the latter recently arriving for £80 million and he’s sure to shore up a defence which has been looking porous for several seasons.

However, Paul Pogba and Alexis Sanchez have remained on the books despite the club’s willingness to move them on in the summer, with Romelu Lukaku departing Old Trafford for Inter Milan and that means that Marcus Rashford and Anthony Martial become the main men.

As for Chelsea, they haven’t been able to splash any cash due to a transfer embargo and are now taken into battle by Frank Lampard who has had to deal with David Luiz deciding he wants to leave the club and join Arsenal.

Eden Hazard has already disappeared to Real Madrid, with Lampard having to hope that Christian Pulisic shines after coming back from a loan spell, while Tammy Abraham and Mason Mount could also be given opportunities.

We think Lampard will adopt an attack-minded approach in most games, with the supporters demanding an exciting brand of football. However, with the Luiz bombshell and the fact that this is a tough opening match for his team, he would be glad of getting a point.

Similarly, we’re not sure how United are going to fare after ending the season so badly and we’re therefore leaning towards the game ending all square, with a low goal count looking more likely than it did before the summer started.

When is Manchester United vs Chelsea being played?

Manchester United vs Chelsea will be played at 16:30 GMT on Sunday 11 August 2019 at Old Trafford.

What is the Manchester United vs Chelsea H2H record?