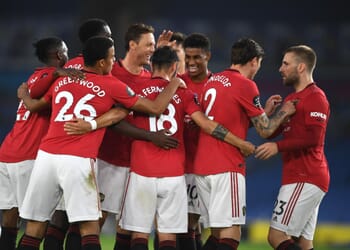 We have spent much of the season looking for ways to oppose Manchester United, although you could arguably say they are the best team in the Premier League right now.

The Red Devils have been purring over the past few weeks, with Paul Pogba having slotted in alongside Bruno Fernandes in a dream midfield pairing, while Ole Gunnar Solskjaer has adopted an attacking approach which sees Mason Greenwood and Marcus Rashford sit either side of central striker Anthony Martial.

Solskjaer is silencing his critics right now, with Scott McTominay and Nemanja Matic operating as the defensive midfield hub, while Harry Maguire and Victor Lindelof form another important partnership in front of David de Gea, while Aaron Wan-Bissaka and Luke Shaw are the roving full-backs.

United have a very strong Starting 11 and Bournemouth could be about to feel the wrath of a team who put three goals past Sheffield United before doing the same at Brighton. The manager has bemoaned them not scoring more and perhaps we could see a sizeable total against a Bournemouth side who look finished as a Premier League entity.

Looking at the league table, the Cherries still have a fighting chance of staying in the division, although a midweek 4-1 home reverse against Newcastle has the alarm bells ringing extremely loudly for Eddie Howe’s team.

Indeed, if Howe wasn’t inextricably linked to AFC Bournemouth and didn’t have so much goodwill bestowed on him at the club, you could argue that he should already have been removed as manager, although he will persevere and try to improve matters.

However, it’s hard to know what tactics will be effective at Old Trafford and we’re going to back the home side off an Asian Handicap mark of -2. That means if they win by three goals or more, then we profit, while a two-goal victory would get us money back.

When is Manchester United vs Bournemouth being played?

Manchester United vs Bournemouth will be played at 15:00 GMT on Saturday 4 July 2020 at Old Trafford.

What is the Manchester United vs Bournemouth H2H record?