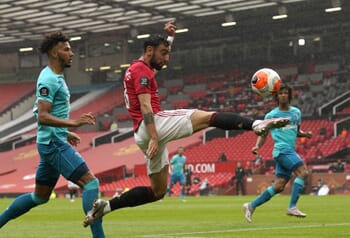 Manchester United haven’t been in this sort of swashbuckling form since Sir Alex Ferguson presided over the Red Devils, with the Scot resigning from Old Trafford duties in 2013 and it’s fair to say that the ensuing seven seasons have not been particularly successful. When a team is in this kind of form, the betting tip has to focus around goals scored - read on for the Sportsgambler betting tip for tonight's fixture.

Our betting prediction is that this will be a high-scoring match where Manchester United are likely to win in the end, although it might be worth checking out the betting odds for correct scorelines such as 4-2 or 5-2. Man United haven’t got close to winning a Premier League title during that period, although there are signs that they might challenge hard during the 2020/21 season, with Ole Gunnar Solskjaer actually putting together a team who could be highly competitive should the Norwegian land some new recruits for key positions.

Since the lockdown, the Red Devils have found another level which has seen them score an impressive fourteen goals in five games, although they did put five goals past LASK in their last game before the enforced rest period, while there was also a 2-0 victory over Manchester City.

The front three of Mason Greenwood, Marcus Rashford and Anthony Martial have been more prolific than Liverpool’s attacking trio and we’re expecting them to cause problems for a Southampton team who are fairly lively themselves when it comes to pouring forward, especially with the resurgence of form of Danny Ings.

Indeed, the Saints won’t have any pressure for this fixture and they have pilfered seven goals in their first four encounters, with Ralph Hasenhuttl’s side also managing to overcome Manchester City thanks to Che Adams’ virtuoso strike.

Bruno Fernandes continues to be a brilliant attacking player who looks a relative snip and the Portuguese can work well in tandem with Paul Pogba, while Solskjaer will care less about clean sheets and instead want to focus on putting on more attacking statements of intent.

When is Manchester United vs Southampton being played?

Manchester United vs Southampton will be played at 20:00 GMT on Monday 13 July 2020 at Old Trafford.

What is the Manchester United vs Southampton H2H record?