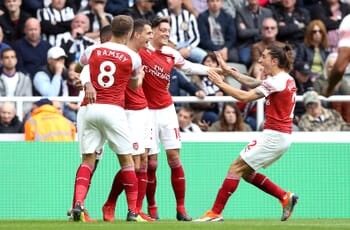 This is not the sort of opening Premier League fixture that Unai Emery would have wanted. His Arsenal team make a long trip to Tyneside and don’t look like obvious winners against a Newcastle side who proved to be a tough nut to crack last season.

The Magpies finished the season in thirteenth place last term, although they suffered a horrendous start to the campaign which saw them fail to win a Premier League encounter until the beginning of November when they triumphed against Watford.

Ten games without a victory made their overall placing all the more remarkable, with Rafael Benitez helping them to a 2-1 win against eventual champions Manchester City in January, while the season ended with just one defeat in five matches and that was an unlucky 3-2 reverse at the hands of Liverpool.

It's been all-change at St James' Park since then, with Benitez being replaced by Steve Bruce, while the team have lost their attacking duo of Salomon Rondon and Ayoze Perez, although Joelinton's arrival means there is some firepower in the ranks. Last season's form of Shane Longstaff was another big plus and the midfielder is likely to improve.

Miguel Almiron should also shine for the Magpies and we’re therefore happy to back Newcastle with a one-goal handicap against an Arsenal side who continually demonstrated a weak underbelly on the road last season.

The Gunners were beaten eight times away from the Emirates and drew a further four times, with just seven victories making them the least successful of the top six clubs on the road.

Emery has looked to strengthen his squad over the summer, especially with Aaron Ramsey having departed to Juventus on a free transfer, with the defence in seemingly urgent need of repair and David Luiz has now arrived to take his place in the heart of defence. Nicolas Pepe was a big money signing and he will be joined by Dani Ceballos.

While Arsenal will target a victory from this game, they might have to be content with a draw before enjoying home comforts the following week.