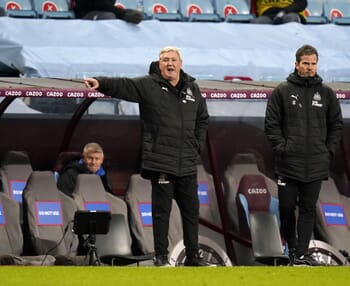 Newcastle United might be in the doldrums right now although we think they’re massively overpriced to get a much-needed victory against an off-colour Leeds United side on Tuesday night.

The Magpies were beaten 2-0 at Villa Park on Saturday although there’s little points-wise between themselves and their Yorkshire opponents in the table and perhaps Steve Bruce will get a gritty performance from his beleaguered troops.

Newcastle a Big Price to Overcome Leeds on Tuesday

There are only four points separating Newcastle and Leeds in the Premier League table and we’re surprised that the Tyneside outfit are such big betting outsiders to win this game. While they are without a victory in their last ten matches, they were going well in the top flight until the middle of December.

Steve Bruce is currently feeling the (online) wrath of the Newcastle United supporters although our prediction is that they can get at least a point from this match, with Callum Wilson looking for some decent service so he can get back on the scoresheet.

Allan Saint-Maximin could start in this clash after being laid low with COVID-19 and could be capable of providing some much-needed creativity along with Miguel Almiron.

Leeds Look Too Short in the Betting to Win EPL Clash

Leeds are the media darlings of the Premier League this season although they’ve been sinking like a stone in recent weeks and we can’t escape the fact that the Whites have conceded an average of nearly two goals per game this term.

Yes, they are capable of playing superlative football although they have also lost five of their nine away games this season and it’s been three defeats without scoring a goal since winning emphatically at West Brom on Tuesday 29 December.

Our tip is to bet on Newcastle with half a goal start on the Asian Handicap betting market and you can get attractive odds with bet365 about them avoiding defeat.

When is Newcastle vs Leeds being played?