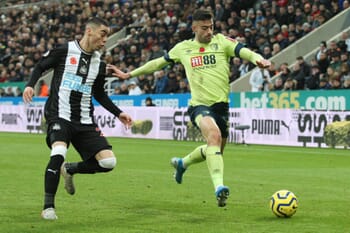 Newcastle United went into lockdown off the back of an FA Cup win at West Brom followed by a victory at Southampton, with the Magpies pretty much picking up where they left off and Steve Bruce’s team have served up emphatic wins over Sheffield United and Bournemouth.

The victory at the Vitality Stadium was arguably the best performance of the season and it’s brilliant to see Allan Saint-Maximin and Miguel Almiron shining for a team who looked like relegation contenders at the beginning of the campaign.

Newcastle can breathe easily as they enter the business stage of the season, with Bruce taking stock of the players’ energy levels although Saint-Maximin was brought off after an hour on the south coast and there was a bright cameo performance from Valentino Lozaro.

On the one hand, the Tyneside outfit are brimming with confidence and challenging for a place in the top-half of the table, although you can alternatively look at the fact that they have won just six of their sixteen matches at St James’ Park and averaged one goal per game at St James’ Park.

West Ham will make the long journey north also feeling pretty good after a hard-earned victory over Chelsea in a match which saw them come from behind to record a 3-2 victory, with Andriy Yarmolenko scoring at the death.

The Ukrainian will be pushing for a start in this clash, especially as the tireless Michail Antonio might start on the bench after an unreal effort when it came to causing problems for the Chelsea back four.

The Hammers are likely to be safe thanks to that victory although we’re inclined to side with Newcastle for this match and will back them on Asian Handicap market. That way, we have the insurance of money back should the game end all square.