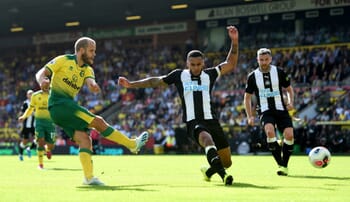 There are five Premier League matches taking place on Wednesday 24 June, although our best betting tip comes for the clash at Carrow Road, while a relegation-fighting Norwich City team go up against an Everton side who ensconced in mid-table with little to play for.

A glance at the table suggests that the Canaries are the worst team in the English top flight and that might be marginally the case, although Daniel Farke’s side have not been out of their depth throughout the campaign and it has been a failure to get points on the road which has led to Norwich’s current plight.

The only team that City have managed to beat on the road this season is actually Everton and so this represents an opportunity to score a rare double and we certainly wouldn’t rule this out, with Norwich proving that there is still fire in their belly before the lockdown.

There was a 1-0 success against Leicester before an FA Cup triumph at White Hart Lane, with the bottom club having avoided defeat in 50% of their matches at Carrow Road this season and continuing to play some excellent football.

One big positive for Farke’s team is that they won’t have unnecessary travel time considering this game falls hard on the heels of a home match against Southampton, while Everton have won only three of their fifteen matches on the road.

In addition, Everton will have come off the back of Sunday’s Merseyside derby where they’ll have pushed themselves to the limit and there were some defensive frailties in evidence when losing 3-2 away to Arsenal before a 4-0 hammering at the hands of Chelsea.

While Carlo Ancelotti is a popular figure among the Gwlady Street faithful, it’s clear that the Italian is not the long-term solution at Goodison Park and we think that our betting tips have to include getting with Norwich in some shape or form.

We will go with Norwich on the Asian Handicap betting market and our prediction that the Canaries will avoid defeat whether that’s in the form of a home win or draw.

When is Norwich vs Everton being played?

What is the Norwich vs Everton H2H record?