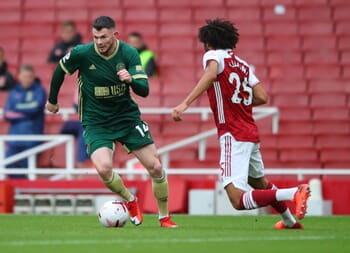 Incredibly, Liverpool now find themselves nineteen points behind Manchester City, with the Reds coughing and spluttering in the vast majority of their games played in 2021, with the latest setback being a 2-0 reverse at home to Everton.

That defeat in the Merseyside derby will have been especially galling considering it saw their city rivals move level on points having played a game less, with Jurgen Klopp’s side heading to Bramall Lane on Sunday as they hope to pick up the pieces of their season.

Liverpool have now lost their past four Premier League matches and they would be regarded as entering crisis mode if they were beaten by a Sheffield United side who must now be thinking about next season in the Championship.

As you might expect, the visitors are big favourites to win although our prediction is that they might find life tough against a team who gave a good account of themselves in the reverse fixture at Anfield and only lost by a 2-1 scoreline.

It should be noted that Liverpool did recently land away wins at West Ham and Tottenham, while they looked comfortable when a goal up at Leicester before a defensive collapse but it’s still hard to be confident about their chances.

Blades Can Put Up a Fight Against Reds

We’re really anticipating a tough battle from the home side who created some good chances when losing at Fulham last weekend and don’t tend to be badly exposed by any side, while they did win at Old Trafford recently.

Chris Wilder’s side have only conceded eighteen goals in their twelve games at Bramall Lane which is less than several other teams in the division and our tip is to back the Blades on the Asian Handicap with a +1.5 goal advantage.

When is Sheffield United vs Liverpool being played?

Sheffield United vs Liverpool will be played at 19:15 GMT on Sunday 28 February 2021 at Bramall Lane.