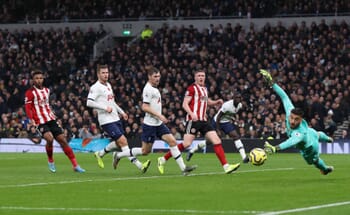 There were only five points separating Sheffield United and Wolverhampton Wanderers in the 2019/20 Premier League standings, with the Blades overachieving compared to their betting odds at the start of the season that had them down as relegation favourites.

Chris Wilder now begins a potentially “difficult season season” at Bramall Lane and there won’t be any supporters at this game on Monday 14 September when the Yorkshire side entertain Wolves, although our prediction is that the home side will hold their own.

Interestingly, United met Wanderers on 8 July where the Blades ran out 1-0 winners and it’s plausible that we’ll get the same scoreline here, with John Egan scoring a last-gasp goal and his defence limiting the visitors to just one shot on target.

While Wolves are the betting favourites to win this match and clearly have the scope to finish higher up the table this year, it appears as though they will have to contend without Matt Doherty and our prediction is that they’ll struggle to find someone who can replace the Republic of Ireland international in that wing-back position.

Raul Jimenez has been a regular source of goals since signing at Molineux, although Nuno Espirito Santo’s side are founded on having a strong defensive core and the midfield duo of Ruben Neves and Joao Moutinho are generally solid rather than spectacular.

While there is more to come from Adama Traore, we’re surprised that Wolves are such a short price for this clash and our tip is that Sheffield United are able to claim at least a point from this encounter and maybe a maximum haul.

Wilder achieved a minor miracle steering his team to a top-half finish last season and the key players have been handed long-term contracts. While there’s a slight concern that Aaron Ramsdale might not match Dean Henderson between the sticks, we’re still happy to punt the home side.

Sheffield United vs Wolverhampton will be played at 18:00 GMT on Monday 14 September 2020 at Bramall Lane.

What is the Sheffield United vs Wolverhampton H2H record?