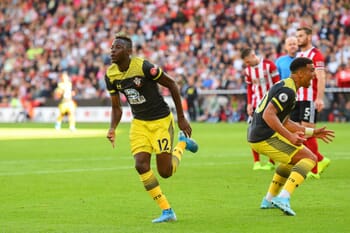 At a shade of odds-against, we’re happy to back Southampton to win Friday night’s South Coast encounter against a Bournemouth side who often wobble on the road.

While the Cherries come into this game after beating Everton at the Vitality Stadium, they had previously made a number of defensive lapses when losing 3-1 at Leicester, while their 2-1 victory at Villa Park earlier this season owed more to the home team shooting themselves in the foot.

Eddie Howe’s team lost thirteen of their nineteen away games in the Premier League last season, with a sum total of forty-five goals conceded and we think they could be vulnerable against a Southampton side who have found some good early season form.

After losing consecutive matches against Burnley and Liverpool, the Saints have worked their way up to tenth in the table after away victories at Brighton and Sheffield United sandwiched a deserved 1-1 draw against Manchester United.

Manager Ralph Hasenhuttl might have the reputation of being the “Austrian Klopp” although he has got the Southampton defence looking very strong, with clean sheets landed at Bramall Lane and the AMEX Stadium, while the same thing happened at Craven Cottage in the EFL Cup.

While Southampton aren’t scoring a ton of goals, one has often been enough this season and Hasenhuttl is likely to bring Danny Ings back into the side to partner Che Adams, with Moussa Djenepo looking like a smart signing.

The 21-year-old arrived from Standard Liege in the summer and scored a wonderful winner against the Blades, with the Malian likely to cause problems for a Bournemouth defence who never seem to convince.

While Callum Wilson has started to hit the goal trail, this is a match where we can be confident that Southampton can effectively outscore their opponents and home advantage certainly counts for something too.

When is Southampton vs Bournemouth being played?

Southampton vs Bournemouth will be played at 20:00 GMT on Friday 20 September 2019 at St Marys Stadium.

What is the Southampton vs Bournemouth H2H record?