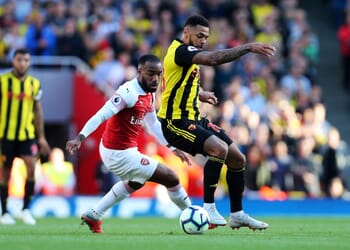 Southampton deserved to win at the Emirates Stadium last weekend although a late equaliser from Alexandre Lacazette means that the Saints are still firmly entrenched in the Premier League relegation zone.

Ralph Hasenhuttl will have been encouraged by the performance of his team and will now hope this can be used as a platform to propel them forward, although form at St Mary’s has been distinctly poor and the team have taken just one point from six games played.

There have been some abject performances and none more so than the 9-0 mauling at the hands of Leicester, although the 2-1 reverse against Everton wasn’t much better, especially the first 45 minutes where Southampton played like a side without any confidence.

They are trading as favourites to win this clash, although it might take a brave punter to back the home side considering that their last Premier League victory came at Bramall Lane in the middle of September.

Watford have also had a dire season to date and they’re now rock bottom of the table following a 3-0 reverse at the hands of Burnley, with the Hornets failing to build on a previous 2-0 win at Norwich.

The Hornets have already parted company with one manager and Quique Sanchez Flores might not last the season, although his team have avoided defeat in 50% of their away matches this season.

Gerard Deulofeu has often been the best player on the pitch and that victory at Carrow Road was preceded by a 1-1 draw at White Hart Lane where Watford were unlucky not to claim a maximum haul.

They actually dominated possession against the Clarets and matched them on the shot count, with Watford available at a decent price on the Asian Handicap market where you get the draw thrown in as part of the deal.

When is Southampton vs Watford being played?

Southampton vs Watford will be played at 17:30 GMT on Saturday 30 November 2019 at St Marys Stadium.

What is the Southampton vs Watford H2H record?