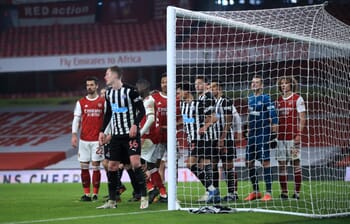 Southampton and Arsenal sit eighth and ninth in the Premier League table respectively, with the former two points better off having played a game less and our prediction is that they’re too big a price to beat the Gunners at St Mary’s.

However, our main betting tip is going to be the draw considering that it was the outcome when the teams met a few weeks ago and we can see them cancelling each other out again considering both teams have watertight defences right now.

Why Are Southampton Such a Big Price to Beat Arsenal?

We wouldn’t put anyone off betting on the 3.10 about a victory for Ralph Hasenhuttl’s side although you can get an even bigger price about the game ending all square and it does appear as though Arsenal are proving difficult to beat on the basis of recent evidence.

When the Gunners clashed with the Saints at the Emirates on Wednesday 16 December, they were stuck in a rut but managed to rescue a point and they are unbeaten in their past six matches thanks to certain players coming to the fore.

Arsenal Now Have Partey Back in the Team

Thomas Partey should always make a difference to the Arsenal line-up considering that the midfielder has shone every time he’s been fielded and the former Atletico Madrid player can now get a run of games to help his side push higher up the table.

Kieran Tierney, Emil Smith Rowe and Bukayo Saka are also producing impressive performances and this is a visiting side who can take a point from this contest and move forward in the hope that they can still challenge for a top four spot this term.

Pierre-Emerick Aubameyang is looking lively for the north London side and has scored three goals in his previous three matches including a brace against Newcastle.

When is Southampton vs Arsenal being played?

Southampton vs Arsenal will be played at 20:15 GMT on Tuesday 26 January 2021 at St Marys Stadium.

What is the Southampton vs Arsenal H2H record?