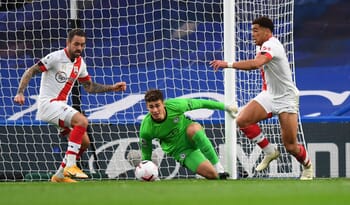 We think the bookies might have their betting prices wrong for this Premier League clash at St Mary’s, with Southampton trading as the outsiders despite a spirited performance at Stamford Bridge last weekend which saw the Saints claim a point.

Danny Ings and Che Adams look like a really dangerous strikeforce this season and our tip is that Southampton will get at least a point from this clash against an Everton side who might be top of the table although they’ve had relatively favourable fixtures to date.

Bet on In-Form Southampton to Avoid Defeat Against Everton

Ralph Hasenhuttl saw his team lose their opening matches against Crystal Palace and Spurs although victories over Burnley and West Brom have steadied the ship, while the team showed plenty of character to come back from 2-0 down and 3-2 down against Chelsea.

While there is still the potential to creak defensively, we still think that the home side are worth betting on the Asian Handicap market considering that the Toffees were somewhat fortunate to get a point from the Merseyside derby.

Jordan Pickford continues to be a liability between the sticks and there will surely come a time when Dominic Calvert-Lewin stops finding the net so regularly, with Richarlison suspended for this clash after getting a red card against Liverpool.

Are Everton Too Short in the Betting for this Premier League Clash?

Carlo Ancelotti has clearly improved the Everton team although they haven’t suddenly turned into title contenders and our prediction is that there might not be much between these two teams in the final reckoning.

Therefore, let’s have a punt on Southampton in such a way that we can get the home win on our side. And the stake back if the match ends a draw. Everton’s away victories to date have only been by one-goal margins against Spurs and Palace, with James Rodriguez proving to be the danger man in midfield and the Saints must work out a way to nullify the Colombian.

When is Southampton vs Everton being played?

Southampton vs Everton will be played at 14:00 GMT on Sunday 25 October 2020 at St Marys Stadium.

What is the Southampton vs Everton H2H record?