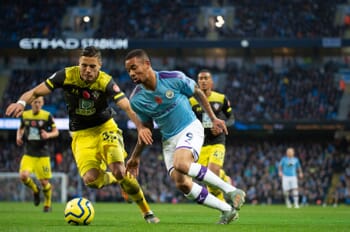 Manchester City might sometimes look like a world-beating team although the plain fact is that Pep Guardiola’s side have failed to win seven of their sixteen away matches in the Premier League this season.

Out of these seven, six have finished in defeat and it highlights that the Citizens do have an Achilles Heel defensively, with Aymeric Laporte beset by injuries, while Vincent Kompany’s departure has led to the team being short of leadership at the back.

Therefore, despite the fact that Manchester City are capable of steamrollering teams as they demonstrated when beating Burnley 5-0 a couple of weeks ago, we still there’s a case for getting against the visitors at St Mary’s.

It’s true that Southampton have had problems at their own stadium this season and they have lost an enormous ten games from sixteen played, with Ralph Hasenhuttl at a loss to explain how this has happened.

However, the Saints have looked bright since the restart and a 3-1 win at Watford came just a few days after a 3-0 victory at Norwich City, so there are no problems finding the net, especially with Danny Ings in the sort of scoring form which has him high on the charts.

Young midfielder Will Smallbone looks to be an exciting talent and he might flourish against one of the best teams in the land, with City likely to heavily rotate as usual and that could even mean Kevin de Bruyne is given a breather.

The best punting angle could be to back Southampton on the Asian Handicap market with a +1.5 goal advantage. It means that we not only profit should the Saints win or draw the game, but we can also win with this bet if Manchester City win by a single goal.