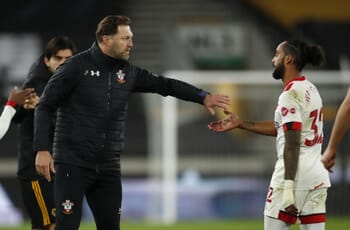 Try and work this one out: the fifth-placed team in the Premier League are pretty big outsiders against a team who sit tenth in the table, despite the fact that Southampton are the home club and they’re currently seven games unbeaten in the top flight.

Ralph Hasenhuttl’s side haven’t looked back since losing consecutive matches against Crystal Palace and Tottenham, with five wins and two draws helping them rise up the standings and our prediction is that they will make life difficult for Manchester United on Sunday.

Southampton Look a Great Bet Against the Red Devils

Danny Ings might not be available for the home side, although they can still cope without the England striker and they took the lead at Molineux on Monday night thanks to the born-again Theo Walcott who is clearly thriving back at St Mary’s after originally starting his career at the Hampshire club.

Che Adams set Walcott up for that goal and is also looking a threat in attack, while the Saints have a settled team which includes Ryan Bertrand and Kyle Walker-Peters in the full-back positions, while Alex McCarthy is faring well between the sticks.

Our betting tip is to back Southampton on the Asian Handicap where they get half a goal start and merely need to avoid defeat in this clash like they have in their previous seven renewals including a match at Stamford Bridge where they claimed a 3-3 draw.

Why Are Manchester United Such Strong Favourites?

Manchester United have been Jekyll and Hyde when it comes to their home and away form this season and there wasn’t a lot to like about their slender 1-0 victory over West Brom last weekend.

On the road, the Red Devils have enjoyed victories away to Everton, Brighton and Newcastle United, although Hasenhuttl will be aware of this track record and won’t want to leave gaps for his team’s opponents to exploit.

We think Southampton can more than match opponents who had a midweek Champions League engagement and also have a home clash against Paris Saint-Germain the following Wednesday.

When is Southampton vs Manchester United being played?

Southampton vs Manchester United will be played at 14:00 GMT on Sunday 29 November 2020 at St Marys Stadium.

What is the Southampton vs Manchester United H2H record?