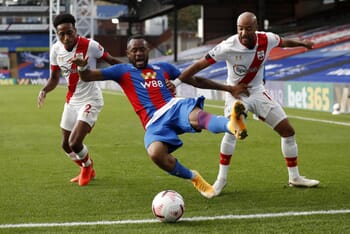 Both Southampton and Tottenham Hotspur suffered defeats in the opening round of Premier League fixtures and they now meet at St Mary’s on Sunday, with both managers keen to get some points on the board.

We’re surprised that the Saints are trading at big betting odds to win this clash, with Ralph Hasenhuttl’s team creating enough chances to win at Selhurst Park last weekend and they’re sure to test a team who looked sloppy and lethargic for the most part against Everton last Sunday.

Can Ings and Adams Cause Tottenham Problems at St Mary’s?

Our prediction is that Southampton will move the ball at a much faster tempo, with Nathan Redmond and James Ward-Prowse likely to take up menacing wide positions and hopefully feeding service through to Danny Ings and Che Adams.

Tottenham were clearly underwhelming against the Toffees, although they were the better team during the first half and Jose Mourinho will hope that another week on the training pitch will improve the team’s performances.

Pierre-Emil Hojbjerg will line up against his former club after making the switch this summer and will look to try and nullify the home team’s attack, while another new signing Matt Doherty has clearly been given the license to bomb forward like he used to for Wolves.

Mourinho was pretty scathing of his team’s opening performance and will want a response here, although the jury is out on whether this Spurs side can challenge for the Champions League and we’re leaning towards the home team at the betting prices.

Our tip is for Southampton to win on the Asian Handicap 0 betting market. It means you profit if Southampton win the game and that the bet is pushed if the game is a draw.

When is Southampton vs Tottenham being played?

Southampton vs Tottenham will be played at 12:00 GMT on Sunday 20 September 2020 at St Marys Stadium.

What is the Southampton vs Tottenham H2H record?