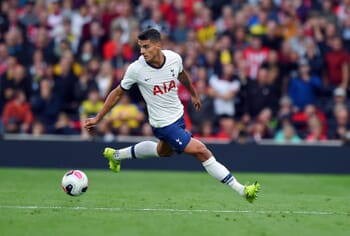 Tottenham Hotspur remain frustratingly short of the Champions League places with fourteen games left to play, with Spurs six points off Chelsea and the margin could be even wider after this weekend.

While Liverpool are romping away with the Premier League title, Manchester City are arguably a more fearsome opponent to face, with Pep Guardiola’s side capable of steamrollering teams home or away.

Indeed, the Citizens have scored more goals on the road (34) than at the Etihad Stadium (31) this season and Jose Mourinho will be spending the next few days figuring out a way to counteract opponents who recently thrashed Aston Villa on their own patch.

Since losing at home to Liverpool, Spurs have been unbeaten in their past four matches although wins have been hard to find under Mourinho, with Norwich only narrowly beaten and games don’t come any easier than this.

The home side are likely to set up fairly defensively as they did against the league leaders and it should be noted that the tactics would have worked a treat if Tottenham had been able to take any of the gilt-edged chances that came their way in the second half.

The bet we particularly like for this clash is the Under 3.5 Goals quote which is trading at 4/6 right now and it means that we profit unless there are four goals or more scored at White Hart Lane.

It’s worth bearing in mind that City have a midweek EFL Cup engagement with Manchester United and it’s also true that Guardiola will have privately conceded defeat in his quest to win a consecutive hat-trick of titles.

While a City win in this game is likely, we’re not sure that they will score freely against a side who haven’t conceded more than once in the past seven games.

Hugo Lloris is back between the sticks and Japhet Tanganga has broken into the first team and looks set to stay there due to his defensive capabilities.

When is Tottenham vs Manchester City being played?

Tottenham vs Manchester City will be played at 16:30 GMT on Sunday 2 February 2020 at Tottenham Hotspur Stadium.

What is the Tottenham vs Manchester City H2H record?