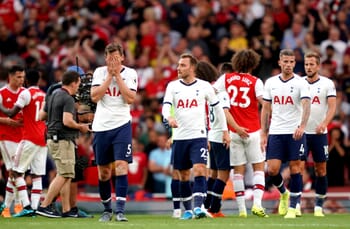 There’s one north London team who are in great form at the moment and it seems logical to go for Arsenal in this North London derby considering they will play this match in an empty stadium and have plenty of experience of playing away games since the lockdown.

While there were consecutive defeats away to Manchester City and Brighton in the beginning, Mikel Arteta’s side have found some form and the wins have been free-flowing, with victories recorded at Bramall Lane, St Mary’s and Molineux – all difficult games on paper.

Arsenal also put Norwich to the sword and will feel confident when they clash with their arch-rivals, with the Gunners still having an outside chance of qualifying for the Champions League, especially if Manchester City remain banned from participating in UEFA competitions next term.

Arteta has reverted to playing a 3-5-2 formation with David Luiz forming part of a three-man central defence alongside Shkodran Mustafi and Sead Kolasinac, with Bukayo Saka proving to be a real shining light this season and there’s the reliable Pierre-Emerick Aubameyang who is capable of pilfering goals in games such as this one.

As for Tottenham, they could be heading for a meltdown under Jose Mourinho. The fanbase has become divided already and a 3-1 defeat at Bramall Lane was a real surprise, with the manager lamenting his team’s attitude although they should be up for this game.

Even so, there are clearly issues within the squad and the bottom line is that Spurs have only won one of their previous nine encounters. Toby Alderweireld continues to sit on the bench despite being widely regarded as the best central defender at the club, with compatriot Jan Vertonghen also used sparingly at the moment.

When is Tottenham vs Arsenal being played?

Tottenham vs Arsenal will be played at 16:30 GMT on Sunday 12 July 2020 at Tottenham Hotspur Stadium.

What is the Tottenham vs Arsenal H2H record?