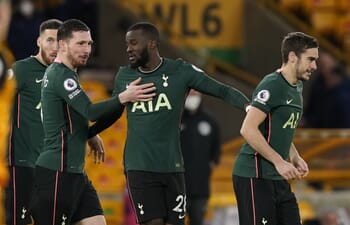 Tottenham Hotspur sitting fourth in the Premier League with a return of twenty-nine points from sixteen games played and that’s about par for Jose Mourinho who has seen his team get to within touching distance of the summit without really threatening a title challenge.

Spurs enjoyed some emphatic victories on the road at the beginning of the campaign, with plenty of goals being scored at Southampton and Manchester United, although the north London side have since reverted to type and they’re narrowly squeezing past opponents instead.

Tottenham have won four of their eight away games this season and the only defeat on the road was suffered at Anfield, with Mourinho’s style of football made for matches away from White Hart Lane although they have often been stifled at White Hart Lane and Fulham will look to nullify their opponents.

Much has been made of Harry Kane and Heung-Min Son in terms of their attacking duo play, although Tanguy Ndombele has really come to the fore this season, while Pierre-Emil Hjobjerg and Moussa Sissoko are capable foils in the defensive midfield position.

Can Fulham Pull Off a Shock by Beating Spurs?

Our betting tip is that Fulham can earn a draw against a Spurs team who just don't convince in these type of games, even if the first team have enjoyed an extended break.