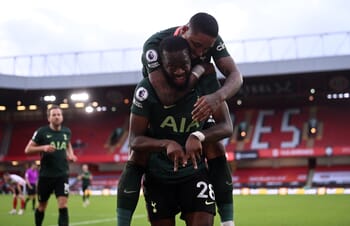 Manchester United have a nine-point cushion over fifth-placed Chelsea with eight games remaining and their approach at White Hart Lane might be a cautious one on Sunday, with the Red Devils having clashed with Granada in the Europa League a few days earlier.

Ole Gunnar Solskjaer has generally fared well against the other leading sides in the Premier League this term although the Norwegian will be acutely aware of the way which his United team were dismantled 6-1 at Old Trafford earlier in the season.

While Manchester United were humbled 3-1 by Leicester in a recent FA Cup clash, the bottom line is that the visitors haven’t lost any of their fifteen away matches in the Premier League this season, with nine wins and six draws playing a big part in making sure that the north-west side are in prime position to be playing Champions League football.

However, one can’t be too confident that the Red Devils will secure three points after a tough midweek encounter and our prediction is that the visitors will adopt a safety-first approach against a Tottenham side who blow hot and cold.

Can Jose Mourinho Engineer a Tottenham Win Over United?

It remains to be seen whether Mourinho can steer Spurs into the Premier League top four this season and it might also be the case that the Portuguese walks away in the summer, although a victory in this clash could see them back on course for a Champions League spot.

One suspects that Tottenham will put up lots of defensive resistance to United in this one and we’re going to tip Under 2.5 Goals between the two sides who could effectively cancel each other out.