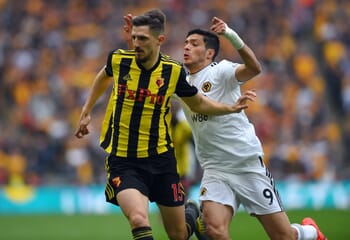 Watford’s resurgence under Nigel Pearson has been nothing short of remarkable, with the Hornets having lifted themselves out of the relegation zone last weekend when winning convincingly at Bournemouth.

The confidence levels are remarkably high at Vicarage Road and we really fancy Watford’s chances in the Saturday lunchtime encounter against a Tottenham side who have won just two of their eleven games on the road this season.

Jose Mourinho’s side are nine points off the top four going into this game and continue to toil without the injured Harry Kane, with Spurs somewhat lucky to land a 1-1 draw against the Hornets in the reverse fixture.

We’re really surprised by the match odds for this game considering the current set of circumstances, with some punters wanting to back the Herfordshire side on the Full Time Result market although we can get a pretty attractive price about them on the Asian Handicap line.

This gives us half a goal advantage which means a draw will be enough to land us a profit and we think that is the least that Watford are capable of getting. Troy Deeney is leading the line well and Abdoulaye Doucoure is probing forward and bossing the midfield department.

There is also Etienne Capoue and Nathaniel Chalobah bossing the midfield, while Tottenham have a problem with central midfield and they will surely have to deploy a more ambitious formation after parking the proverbial bus against Liverpool.

Watford are unbeaten in their past six games and we should pay little attention to the recent 3-3 draw against Tranmere in the FA Cup where the big guns were rested, with Pearson taking no chances with team selection when it comes to the replay at Prenton Park.

This should be a close encounter but side with the Hornets to make home advantage count come the final whistle.

When is Watford vs Tottenham being played?

Watford vs Tottenham will be played at 12:30 GMT on Saturday 18 January 2020 at Vicarage Road.

What is the Watford vs Tottenham H2H record?