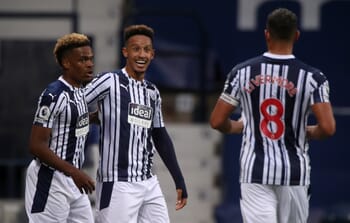 It’s clear that West Brom have come back from the international break with a spring in their step, with the Baggies inexplicably putting five goals past Chelsea at Stamford Bridge and manager Sam Allardyce will be hoping for a grandstand finish to the season.

Albion have been in then doldrums for much of the campaign and that shock victory in London was just the fourth win in thirty games, with Matheus Pereira the key to any possible chance of WBA remaining in the Premier League.

West Brom still need to find eight points on seventeenth-placed Newcastle United with eight games remaining and only wins will suffice from this point onwards. There are twenty-four points on the table and our prediction is that the Midlands team will adopt an attacking approach in search of goals.

While Albion have only scored nine goals in fifteen encounters at The Hawthorns, Callum Robinson could have played his way into the Starting 11 for this clash and it’s now imperative that the relegation-threatened team rack up points in order to stay up.

Bet on Another High-Scoring Southampton Match

Southampton have been an unpredictable team to back and this was illustrated when they fell two goals behind against Burnley last weekend only to rally and claim a 3-2 victory, with our tip being that they’ll be involved in another high-scoring clash here.

All of the Saints’ previous four encounters have featured at least three goals and they’ll certainly look at this fixture as one that they can achieve a victory against a side who have spent a good deal of the season losing.

Danny Ings was back on the scoring trail last weekend and there have now been eleven goals scored in the previous five matches, so we’re fairly confident that they can be amongst the goals here.

When is West Brom vs Southampton being played?

What is the West Brom vs Southampton H2H record?