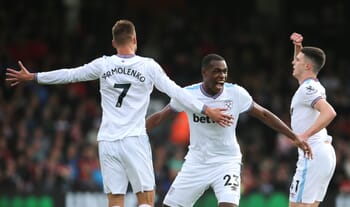 There seems to be a consensus that Arsenal are currently under-performing in the Premier League this season although perhaps the Gunners are just a mid-table team who are now stuck in a rut following the departure of Unai Emery.

The North London side have just nineteen points from fifteen games played and were turned over at home to Brighton recently, with caretaker boss Freddie Ljungberg admitting that his players are short of confidence at the moment.

We’re not quite sure why the Gunners are trading at such a short price to win at the London Stadium on Monday night, with the visitors having won just one of their seven games on the road this term and they continue to be defensively porous.

The Seagulls scored two goals at the Emirates Stadium after Norwich had also scored a brace of goals and it might have been more for the Canaries if it wasn’t for the goalkeeping heroics of Bernd Leno.

It seems unlikely that Ljungberg is the man to take the team forward on a long-term basis and the team are therefore in a state of flux when it comes to facing a West Ham side who can actually go level with their opponents on Monday night.

Manuel Pellegrini’s side are not in great form themselves although they recently dug out a 1-0 win at Stamford Bridge and will feel as though this is a good time to be facing a team who are out of form.

Perhaps Andriy Yarmolenko will come back into the team for this clash, while goalkeeper David Martin makes the team more solid between the sticks and we can’t resist a punt on the home side with half a goal start.

Manuel Pellegrini will fire his team up knowing that his own job is in jeopardy although they should at least be good enough to get a point.

When is West Ham vs Arsenal being played?

What is the West Ham vs Arsenal H2H record?