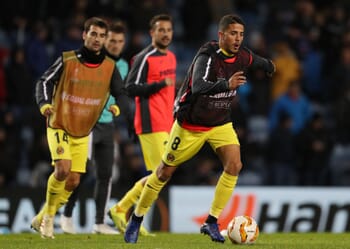 West Ham United are likely to have acquired several new players by the time they face Manchester City on Saturday 10 August, with Pablo Fornals (pictured) among them.

The Spanish international shone in La Liga last season for Villarreal and the attacking midfielder should feature prominently for the Hammers, while Andriy Yarmolenko should also be back from injury and the Ukrainian international looked highly promising last season before being sidelined.

Sebastien Haller has also arrived for the princely sum of £45 million, with the former Frankfurt striker looking to endear himself to the club's supporters by getting off the mark against the Premier League champions.

This is West Ham’s first home match of the campaign and they’ll want to acquit themselves well against champions Manchester City, especially as they lost this fixture by a 4-0 scoreline last term and really let themselves down.

However, Manuel Pellegrini’s side did go on to hold Liverpool to a 1-1 draw in January and the Chilean will have grand designs of finishing at least seventh with his team this season, while he might consider this a good time to be facing a Manchester City side who are getting their ducks in a row.

Pep Guardiola will understand that perhaps a 100 points or more tally will be required to land a third consecutive title at the Etihad Stadium this term, with the Spaniard looking for one more good season from David Silva.

Raheem Sterling is clearly on an upward curve and Kevin de Bruyne will be like having a new player back in the squad considering that the Belgian barely had an opportunity to make an impact last term.

City weren’t completely watertight defensively last term and we would expect a new-look West Ham team to cause a few problems, especially after spending close to £80 million on players.

The Hammers ended the 2018/19 campaign strongly and we think they are worth a bet on the handicap market with a two-goal start. It means that they can afford to lose by a single goal and we’d still win with this bet.

When is West Ham vs Manchester City being played?

West Ham vs Manchester City will be played at 12:30 GMT on Saturday 10 August 2019 at London Stadium.

What is the West Ham vs Manchester City H2H record?