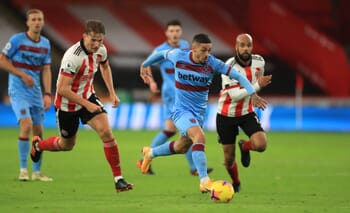 West Ham United have come through a tough run of Premier League matches with a decent points total and their win at Bramall Lane last weekend was their fourth of the season and means they’re sitting eighth in the table.

David Moyes really is silencing his critics at the London Stadium and a victory over Aston Villa on Monday would be a third in a row for a Hammers team who have been missing Michail Antonio for the past three matches.

Since losing at home to Newcastle in their opening match, West Ham have been strong at home, defeating Wolves and Fulham along with a deserved 1-1 draw against Manchester City. It is noticeable how strong they have looked defensively and our prediction is that the Hammers will keep things tight against Aston Villa.

West Ham have conceded just ten goals in nine games and half of that tally came in two games against Newcastle and Spurs, with the latter scoring three first half goals before Moyes’ men rallied to land a point.

It’s been a healthy start to the season for Aston Villa who are a point better off than their opponents having played a game less, although Dean Smith’s side have been decidedly sketchy since winning at Leicester in the middle of October.

There have been three consecutive home defeats against Leeds, Southampton and Brighton although there was a 3-0 victory at the Emirates Stadium to illustrate that the Midlands side might be more comfortable away from home this term.

Even so, Smith will be concerned by the number of goals his defence are conceding and our betting tip is for there to be Under 2.5 Goals in this clash which can be backed at odds-against right now.

When is West Ham vs Aston Villa being played?

What is the West Ham vs Aston Villa H2H record?