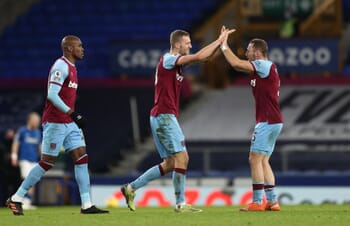 West Ham United have had a fine season in the Premier League and it would be the icing on the cake if David Moyes’ side were somehow able to squeeze into the top four and qualify for the Champions League.

The Hammers’ 2-1 win at Turf Moor on Monday means that the dream is very much alive and our prediction is that they can follow up this victory with another three points over an Everton side who continue to prove inconsistent.

Why West Ham Are a Great Bet to Beat Everton

David Moyes will relish going up against his former club where he originally built a strong managerial reputation, with the Scot having been in the wilderness following a brief spell with Manchester United before really coming to the fore this season.

Indeed, Moyes was among the Sack Race betting favourites at the beginning of the 2020/21 season, although Michail Antonio’s return was timely in the latest game which saw the forward pilfer a brace against a dangerous Burnley side who had previously won 4-0 away at Wolves.

Bet Against Everton After Defeat Against Aston Villa

Although Carlo Ancelotti’s side were riding high at the beginning of the season, they have flattered to deceive despite those eye-catching signings of Allan, James Rodriguez and Abdoulaye Doucoure, even with Dominic Calvert-Lewin having a fine campaign.

The England international was on target against Aston Villa although Everton still leaked two goals and it could have been more if it wasn’t for the goalkeeping of Jordan Pickford, with the Merseyside team often reserving their best form for away matches.

Even so, we believe that West Ham’s motivation will be greater and they can come through to win this clash and hope to close the gap on Chelsea, with the former having no distractions as they look to finish the season strongly.