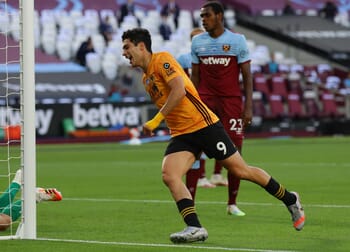 Wolverhampton Wanderers are dreaming of a spot in next season’s Champions League and they have restarted the 2019/20 season in exactly the right way, winning a trio of matches against West Ham United, Bournemouth and Aston Villa.

Wolves are rarely a team that blow the opposition away, although a stout defence means that one goal has been good enough in their most recent two matches and the same might apply when they entertain Arsenal this weekend.

Rui Patricio is rarely talked about, although the Wanderers goalkeeper is highly experienced and operates behind the defensive trio of Willy Boly, Conor Coady and Roman Saiss.

Manager Nuno Espirito Santo has a settled team that is churning out the results on a regular basis, while Adama Traore and Pedro Neto are the not-so-secret weapons who are making effective cameo performances from the bench.

Everything is going swimmingly for the Midlands side although their determination to stop the opposition in their tracks does affect how many scoring chances are created and Arsenal will pitch up at Molineux hoping to give a good account of themselves.

The Gunners have won just three times on the road this season and restarted the season with defeats away to Manchester City and Brighton, although that has been followed by a Premier League win at Southampton and then an FA Cup victory at Sheffield United.

The latter win was achieved without Pierre-Emerick Aubameyang, Sokratis and Hector Bellerin, with David Luiz coming back into the team and playing a part in central defence.

Arsenal need snookers if they are to qualify for next season’s Champions League although it seems likely that they will try and put up a stubborn defence in this clash and we’re betting on two goals or less to be scored over the ninety minutes.

When is Wolverhampton vs Arsenal being played?

Wolverhampton vs Arsenal will be played at 17:30 GMT on Saturday 4 July 2020 at Molineux Stadium.