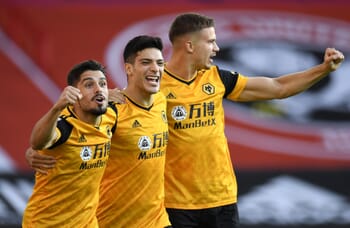 We don’t like to kick a team when they’re down although Fulham already look like the Premier League whipping boys this season and our prediction is that the Cottagers will succumb to a fourth successive defeat of the campaign on Sunday.

Are Fulham a Good Bet to be Relegated This Season?

Scott Parker is clearly desperate to improve the current squad who appear woefully out of their depth after losing matches against Arsenal, Leeds and Aston Villa, with the latter claiming a 3-0 win at Craven Cottage which has really set the alarm bells ringing.

Fulham will now head to Molineux in a desperate bid to get at least a point on the board before the international break, with Aleksandar Mitrovic likely to prove a handful for a Wanderers side who conceded four goals at the London Stadium last weekend.

We are going to tip a Wolverhampton Wanderers victory in this game although we’re somewhat wary of backing a team who were roundly outplayed by West Ham and there will have been some soul-searching at the club for the past few days.

Nevertheless, Wolves were flying out of the traps when claiming a 2-0 win at Sheffield United and the presence of Raul Jimenez should mean they carry enough of an attacking threat to get the better of a Fulham defence which appears ridiculously leaky.

The visitors have already conceded ten goals in their first three matches and we might see Adama Traore and Daniel Podence have an impact from the wide positions, even if Nuno Espirito Santo is still trying to find the right blend of players as part of a Starting 11.

The betting odds indicate that Wolves are trading at 1.50 to win this game and we think that looks a rock solid pick as far as a football betting accumulator is concerned, with Wanderers going back to defensive basics after an uncharacteristic reverse last weekend.

When is Wolverhampton vs Fulham being played?

Wolverhampton vs Fulham will be played at 14:00 GMT on Sunday 4 October 2020 at Molineux Stadium.

What is the Wolverhampton vs Fulham H2H record?