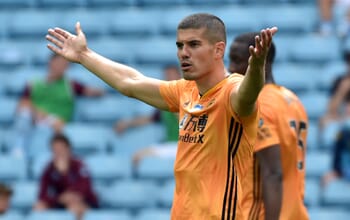 Manchester City benefitted from a delayed start to their 2020/21 domestic season due to their Champions League involvement over the summer, with Pep Guardiola’s side stepping out for the first time when they clash with Wolverhampton Wanderers at Molineux.

Many experts are tipping City to regain their top-flight title and it’s hardly a surprise considering how impressive they were when being crowned champions in 2018 and 2019. While last season was a blip, they still have the ability to crush teams even if there’s an increasing over-reliance on Kevin de Bruyne.

Nathan Ake has been signed to bring some defensive steel alongside Aymeric Laporte, while Ferran Torres has also arrived from Valencia and we should see an increasing amount of game time for Phil Foden who can benefit from David Silva’s departure.

We know that City favour an attacking approach and Wolves might initially try to keep things tight in this clash, with Nuno Espirito Santo’s team having beaten these opponents home and away last season.

However, our prediction is that they might end up chasing the game after going a goal down and Wanderers are not the best when it comes to that situation, with Raul Jimenez their go-to source of goals, although no other player got remotely close to a double figure tally in the EPL.

Diogo Jota could end up thriving alongside his strike partner and looked bright for Portugal in the Nations League recently, with Fabio Silva also likely to play a part after arriving from Porto.

However, the departure of Matt Doherty deprives Wolves of that important attacking outlet and we think Manchester City are a good bet to win this clash and get three points on the board.

Instead of betting them at short prices, we will instead back them to win and both teams to find the net, something that is trading at a far more attractive price than the Full-Time Result odds.

When is Wolverhampton vs Manchester City being played?

Wolverhampton vs Manchester City will be played at 20:15 GMT on Monday 21 September 2020 at Molineux Stadium.

What is the Wolverhampton vs Manchester City H2H record?