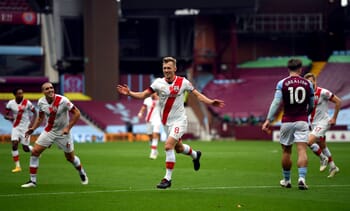 Southampton started the Premier League season badly after defeats against Crystal Palace and Tottenham Hotspur, although the Saints haven’t looked back since landing a 1-0 victory at Burnley and now find themselves in the upper echelons of the table after the international break.

Ralph Hasenhuttl is really getting a tune out of a modest group of players and Southampton’s recent 2-0 win over Newcastle was achieved without the injured Danny Ings, with Che Adams scoring his third goal in four games and he’s definitely a striker to watch.

We’re surprised that the Saints are such a big price to win at Molineux and our prediction is that the match against Wolves will be a close one, especially as the visitors are now enjoying a six-match unbeaten run which has included five victories and a draw.

Bet on Southampton on the Asian Handicap Market

We can get generous betting odds of 1.625 about Southampton either winning or drawing this match, with Ings expected to return for this clash and we’re looking forward to another bright performance from James Ward-Prowse, while Theo Walcott is enjoying himself back on loan at his former club.

Wolves are going to be a tough nut to crack and they sit ninth in the table after amassing thirteen points from eight games played, with the team enjoying a four-match unbeaten run of their own recently before getting touched off 1-0 by Leicester.

Wolves Look Too Short in the Betting for EPL Clash

Nuno Espirito Santo’s side have enjoyed bloodless wins over Crystal Palace and Fulham this season, although they were held to a 1-1 draw against Newcastle, with Wanderers never an easy prospect to back at short prices and we’re veering away from having a bet on them.

The home side will be wary of a team who scored three goals at Chelsea and four goals at Villa Park, with Nuno’s side always operating from a safety-first point-of-view and we’ll take a chance on a Southampton victory on the Asian Handicap.

When is Wolverhampton vs Southampton being played?

Wolverhampton vs Southampton will be played at 21:00 GMT on Monday 23 November 2020 at Molineux Stadium.

What is the Wolverhampton vs Southampton H2H record?