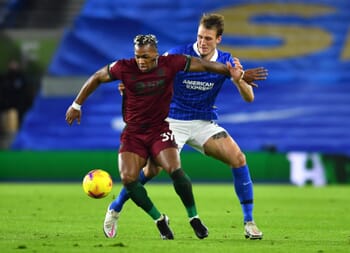 It’s been a while since we enjoyed a Black Country derby between Wolverhampton Wanderers and West Brom, although the two teams are set to renew their rivalry in this lunchtime clash on 16 January, with Wolves the strong betting favourites to win.

Nuno Espirito Santo’s team have become an established Premier League team since getting promoted to the top flight, whereas the Baggies have only recently returned to the division and their stay looks to be a short one unless results drastically improve.

Wanderers currently sit thirteenth in the Premier League table and they have certainly found life difficult without leading striker Raul Jimenez, while they recently took the handbrake off away to Brighton and led 3-1 at the AMEX Stadium before being pegged back to draw the match.

Wolves have been relatively stubborn at home this season and only experienced two defeats at Molineux, with this being the third home game in a row after an FA Cup clash against Crystal Palace before an EPL encounter against Everton.

Our tip is that Wanderers will win this game and they’re also capable of shutting out a team who look incapable of keeping a clean sheet, with the goals against column looking to be a massive concern despite the recent arrival of Sam Allardyce.

West Brom Look Doomed for the Drop Under Allardyce

While Sam Allardyce is right to back himself in any given situation given his amazing track record at keeping teams afloat in the top flight, the prognosis looks pretty bleak for a team who only have eight points on the board so far.

A 1-1 draw at Liverpool shortly after Allardyce’s arrival suggested that brighter times lay ahead this season, although thumping defeats at home to Leeds and Arsenal imply that West Brom are now heavily likely to be relegated.

We expect the Baggies to try and keep things tight against their rivals although the best bet could be a Wolves victory without conceding and we’re happy to take odds-against.

When is Wolverhampton vs West Brom being played?

Wolverhampton vs West Brom will be played at 12:30 GMT on Saturday 16 January 2021 at Molineux Stadium.