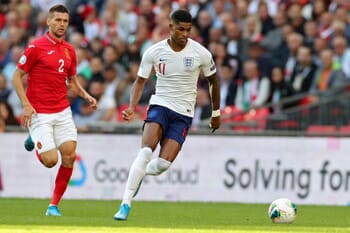 Bring back the Nations League! While England enjoyed some excellent tussles against the likes of Spain, Croatia and the Netherlands in that particular competition, Euro 2020 qualifying has seen the Three Lions involved in a series of one-sided clashes.

Gareth Southgate’s side have scored fourteen goals in three matches played, with the latest emphatic victory being a 4-0 winning scoreline against Bulgaria and we might see something similar against Kosovo on Tuesday evening.

The visitors arrive at Wembley Stadium unbeaten in four qualifying matches to date, having won two and drawn two so far and this provides them with an excellent chance of reaching their first ever major football tournament.

Kosovo have only been a UEFA nation since 2016 although they have a decent squad of players, with goalkeeper Samir Ujkani captaining the team and he plays his club football for Torino.

Similarly, Lazio’s Valon Berisha adds quality in the midfield department although it’s safe to say that none of this squad would get close to the England set-up and that there’s a big gap between the Three Lions and the rest of the teams in Group A.

We’re going to back England on the Asian Handicap for this encounter. While it’s eminently possible that Southgate will use this match to give younger players an opportunity, he will also want to make sure of a solid victory.

Kosovo’s game plan will be similar to the other visitors to Wembley and that means defending deep and denying England the opportunity to get in behind them with ease.

However, Bulgaria struggled to work the ball out from deep and it ultimately led to England scoring an opening goal, while they also conceded two penalties.

Over the ninety minutes, we expect the Three Lions to be at least three goals better off than their opponents as they look to continue that 100% qualifying record.