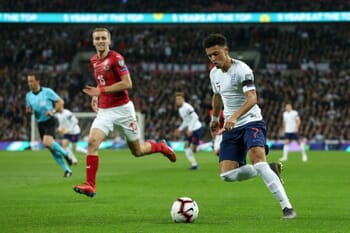 England are virtually certain to qualify for Euro 2020 on Thursday night, with the Three Lions sitting top of Group A after winning five of their six matches played thus far.

Gareth Southgate’s side have scored 26 goals in qualifying and five of those were scored in Montenegro as part of a 5-1 triumph, with a similar scoreline expected at Wembley Stadium against a team who have struggled to find the net during qualifying.

Southgate has named a typically strong squad for this clash despite criticism that Jack Grealish isn’t included after some bright performances for Aston Villa. However, the reality is that England have scored at least four goals in every home qualifying encounter thus far.

Therefore, we’re happy to back the home side at -2.5 on the Asian Handicap market which means they simply need to enjoy a victory by a three-goal margin, with some punters potentially likely to profit if you went further and backed them at -3.5

Montenegro claimed a 1-1 draw in Bulgaria but they suffered a 2-0 defeat in Kosovo and were beaten 3-0 by Czech Republic in Prague, with the visitors struggling to avoid finishing bottom of this section.

This could be an opportunity for players such as James Maddison and Callum Hudson-Odoi to feature, while Southgate will be looking for some defensive robustness considering that the Czechs scored twice against them after Kosovo had managed three.

This will be the final home match for England in qualifying and they’ll want to go out in style, with Harry Kane and Raheem Sterling in a goals race to see who will end up top of the pile.