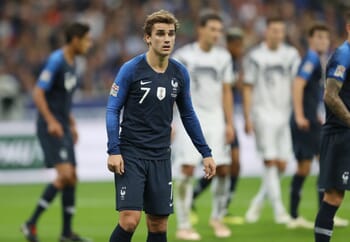 France are firmly on course to qualify for Euro 2020 after five wins from six matches, with the only blip being a 2-0 defeat in Turkey.

Aside from this loss, Les Bleus have been leading at half-time and full-time in all their other matches, with Didier Deschamps’ side making a habit of getting their noses in front before going on to claim the spoils.

France have already beaten Iceland by a handsome margin when winning 4-0 in Saint-Denis, with goals from Umtiti, Giroud, Mbappe and Griezmann helping them to a facile victory and we might witness something similar here.

There are a couple of notable absentees, with Mbappe and Paul Pogba unavailable due to injury, although Antoine Griezmann continues to score goals with aplomb for his country and there are several other exciting attacking options.

This could be a game where we see Kingsley Coman or Thomas Lemar play a starring role for their country, with Iceland under pressure to land a victory if they’re to finish ahead of Turkey or France in the standings.

While Iceland boast a 100% home record in the group, they have shown vulnerabilities in defence when losing 4-0 in Paris and also 4-2 in Albania.

Erik Hamrén is looking to continue the success that saw the team claim berths at Euro 2016 and also the 2018 World Cup, although this is an ageing squad who had more of a bumper crop four years ago.

Therefore, we’re going to get with France to win this game by being ahead at the break, with Deschamps looking for his team to get on the front foot and there are still many high-class operators including N’Golo Kante and Blaise Matuidi.