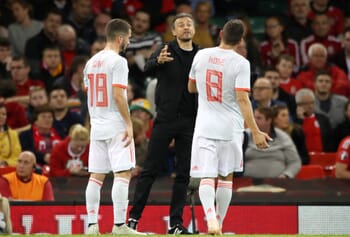 Spain are one of the leading teams in Europe and they’ve made short work of qualifying for Euro 2020, with La Roja racking up the victories.

It’s been six and counting for Robert Moreno’s team and we’re expecting them to claim another maximum haul against a Norway side who are still in the hunt to land second place in the group.

Lars Lagerback is the experienced manager tasked with trying to steer the Nordic team to a major finals and they’ve acquitted themselves well by winning two, drawing three and losing one of their games so far.

This is also a team who are averaging nearly two goals per match, with the Norwegians only losing 2-1 away to Spain in the reverse fixture and it should be noted that they’ve found the net in all of their qualifiers thus far.

There was a crazy 3-3 draw against Sweden which initially saw Norway throw away a two-goal lead to trail 3-2 before scoring right at the end of the match.

Fans will be disappointed that teenage sensation Erling Braut Haland is unavailable to play in this clash after starting the season brightly, although Josh King is a regular operator for Bournemouth in the Premier League.

It was King’s penalty that gave Spain a scare in the reverse fixture, with Rosenborg’s Bjorn Maars Johnsen having pilfered three goals of his own during qualifying and Norway have to take an attacking approach.

Similarly, Spain have found the net in all of their matches and Rodrigo is the likely operator up top after a bright start to the season for the Valencia man.